MULTICULTURAL FESTIVALS IN UK THERE ARE A LOT OF FESTIVALS THAT ARE CELEBRATED IN UK,BUT THEY ARE OF FOREIGN ORIGIN

Do you know that in UK there are festivals that really are of other countries? 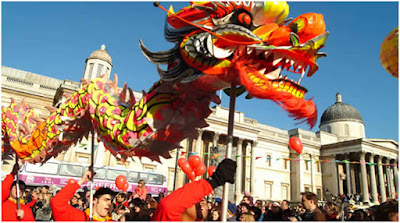 Diwali. Itis the Festival of Lights for Hindu, Sikh and Jain communities.
Cities including Leicester, London and Nottingham have extravagant street parties with traditional food, music, crafts and dancing and there are lanterns, candles and fireworks.

Eid al-Fitr. It is an important Islamic festival celebrated at the end of Ramadam, a long fast where Muslims do not eat during the day.
Each community usually organises its own events, with some large celebrations in cities like  London and Birmingham.
Jan – Hanukkah. It is a Jewish festival celebrated from December 6th to 14th.
It is the festival of Lights and in London, at Trafalgar Square, there is the “Menorah”,lit by the Mayor of London on the first day of Hanukkah.
The Menorah is a lamp with six brances, a symbol of Jewish community.
People eat doughnuts and listen to live music.

All these festivals, which combine religion and tradition, are very important because they create a mix of cultures and let other people , from other cultures, to share them together.
So, experiencing and accepting other cultures can help young people grow and become good citizens.